If you develop an iOS app, you know this: Creating screenshots is a lot of work. You need updated screenshots for all your device types in all your languages, and manually creating all those takes a long time.

Lots of people are using fastlane to create their screenshots, but for a variety of reasons, I decided against it. I had tried it out before, but it doesn’t really fit into my development workflow, and it feels like too much for just taking screenshots.

Fastlane uses XCUITest to take screenshots anyway, so I decided to try out if I could recreate the functionality of fastlane snapshot without using Ruby, without installing any gems, and without having to buy into the fastlane ecosystem.

My goal: Write an Xcode UI Test that takes screenshots, then extract and collect those screenshots for all languages and devices into a folder on my Desktop. I’m going to use my own app, Libi, as an example.

After some fiddling, here are my results.

Overview over the Process

Here are the steps we need to take:

Below are my solutions to all 4 steps, plus some addenda that make things easier. If you’re stuck, read through to the bottom to see if a solution to your problen is already there.

Just a quick sneak preview, here is how things should look like at the end: 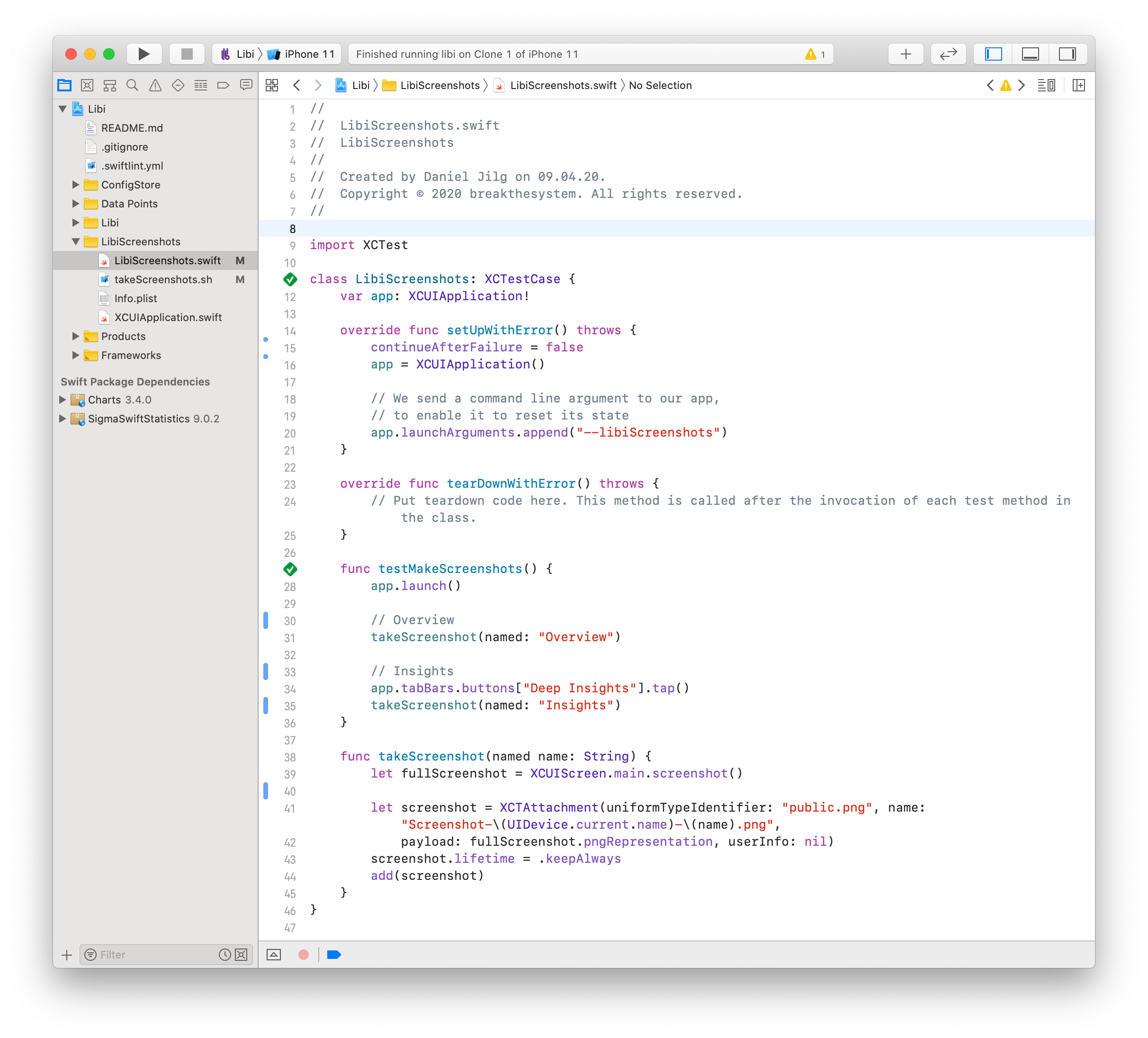 Note: I wrote this article against Xcode 11.4 and Swift 5. If you use different versions, your experience may differ.

Add a new property to your test class to keep track of the XCUIApplication:

then initialize the app property in your setup method:

Now you can create your first test. I put the whole screenshot flow into one test, but might split individual flows off into their own test functions later:

This test uses a function I wrote, takeScreenshot(named:), which extracts the correct way of taking screenshots in our situation. See below for the function code.

Note: If you don't want to write your UI test yourself, or you want an easy starting point, you can try recording your steps instead. To do that, place the cursor inside your testMakeScreenshot function and click the little 🔴 record button in the bottom toolbar. This will launch your app in the simulator and then record your taps there as code inside the test function. Click the record button again to stop.
Another Note: The Xcode UI testing framework is pretty dependent on accessibility identifiers. If you don't explicitly set those, UIKit will use the text values of things like buttons or labels as accessibility identifiers, but since these are localized, your tests might not work after switching the scheme language. My recommendation is to set the accessibilityIdentifier property of things you need to access in your tests real quick.

Since we want to identify our screenshots, we name them. And since we want to keep them until after the end of the test is run, we’ll also have to mark them as “keep always”.

Earlier, we set a command line argument. Here’s a quick example code on how to retrieve that in your AppDelegate.swift:

Check if the Screenshots are There

After this step, you can already see the screen shots in the test logs. Make sure that is the case. 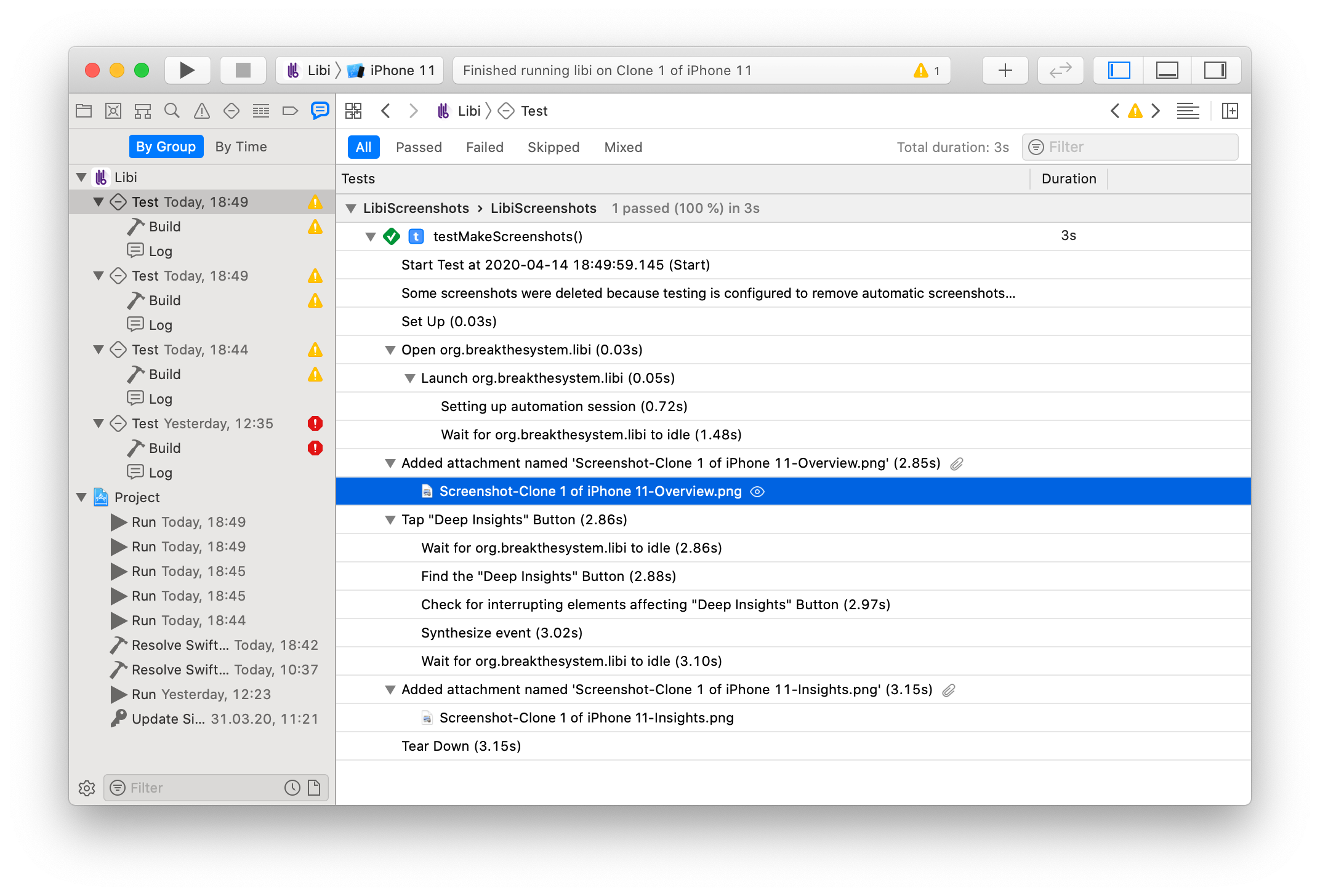 Yay, we have screenshots. That’s the hardest part done. But we’re not there yet. We need extraction, and automation.

A Note on Idling: If you have a lot of Waiting for application xyz to idle messages in your logs, or your test workflows are generally flaky, this might be because of animations that are running. If you set up a command line flag earlier, you can use this to tell your view controllers to disable animations by calling UIView.setAnimationsEnabled(bool). Here's an example where I use my implementation of a Config Store:

If we want to automate things, it’s a good idea to run them from the command line. Go to your terminal, navigate to the directory that contains your .xcodeproj file and run the following command (replace scheme name and project file name)

If the Simulator app is currently running on your system, you’ll be able to watch live as the test taps through your app. Otherwise the tests will run in headless mode.

After the tests are done, you’ll find a test result xcresult file in the derived data Path, /tmp/LibiDerivedData/Logs/Test/. It is a package, and it contains all the data we already saw in Xcode.

However, the data is not usable right now. There are no PNG files here, which is disappointing.

Note: In fact, if you watch the .xcresult package contents while the test is actually running, you can even see your screenshots being saved in there as PNGs. However, they then get packaged into the .xcresult format, which is a bit annoying. I wish we could just tell Xcode to leave them out in the open.

The .xcresult package format is pretty complicated and I didn’t really want to parse it myself; luckily I didn’t have to. There’s a tool called xcparse which does exactly that. Install it via homebrew:

After installing xcparse, you can use its screenshots command to extract all screenshots from a given xcresult into a folder like so (replace folder names as necessary)

Fourth Step: Run for each Combination of Device and Language.

And we are basically done. All we have to do now is run the xcodebuild and xcparse commands for each combination of language and simulator and collect the screenshots in a central location. Let’s dust off these bash scripting skills:

I called this file takeScreenshots.sh and added it to the Xcode project for easier editing, inside the LibiScreenshots folder. In the repository root folder I can call it like so:

and it should run for a while and take a huge swath of screenshots! 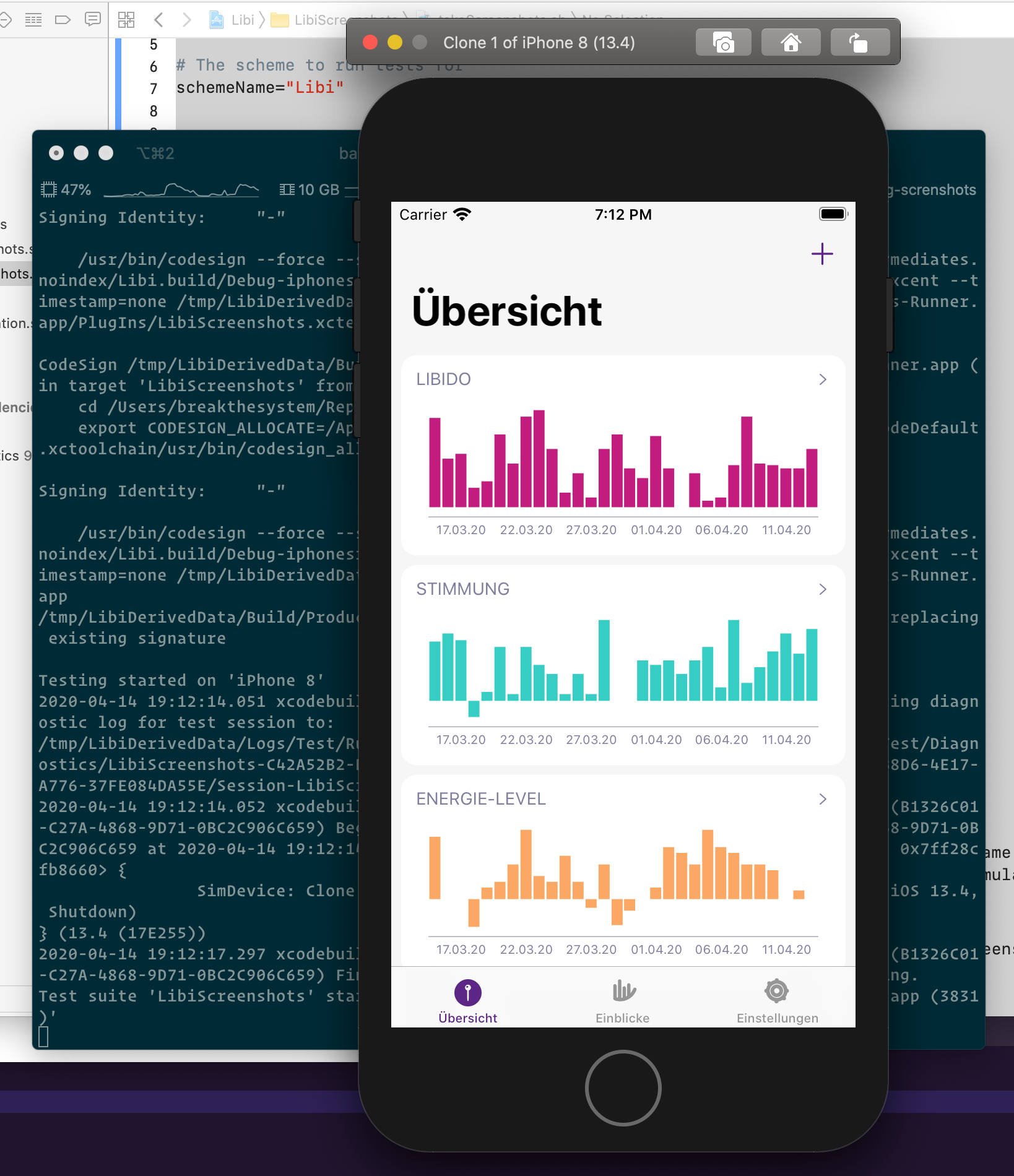 Thanks for reading! Feel free to mention me on Twitter if you have questions or comments.

And check out Libi, my free app for tracking your mood, energy level, and libido. It's a labor of love, super privacy focused, and aims to improve your life and mental health with sophisticated analyses and awareness of where your head is at. Thanks 💙